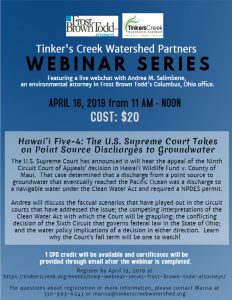 Join us to learn more about their services and all the benefits they can provide your business or organization!

For only $20, you can have the chance to take part in a LIVE webchat with Andrea M. Salimbene, an environmental attorney in Frost Brown Todd’s Columbus, Ohio office.

1 CPD will be available and certificates will be provided through email after the webinar is completed.

The U.S. Supreme Court has announced it will hear the appeal of the Ninth Circuit Court of Appeals’ decision in Hawai’i Wildlife Fund v. County of Maui.  That case determined that a discharge from a point source to groundwater that eventually reached the Pacific Ocean was a discharge to a navigable water under the Clean Water Act and required a NPDES permit.

Andrea will discuss the factual scenarios that have played out in the circuit courts that have addressed the issue; the competing interpretations of the Clean Water Act with which the Court will be grappling; the conflicting decision of the Sixth Circuit that governs federal law in the State of Ohio; and the water policy implications of a decision in either direction.  Learn why the Court’s fall term will be one to watch!

A link to the webinar will be provided after payment has been received. Register by April 15 at 4:30 pm.