Wetlands as a Tool for Flood Control and Prevention 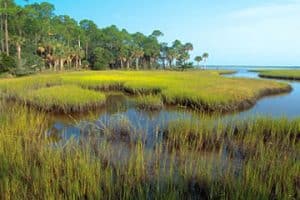 Wetlands are often drained and destroyed in favor of urban development.  These ecosystems are also important habitat for amphibians, fish, plants, and other wildlife.  Used by many different organisms at different stages of their lives, wetlands have been found to be one of the most productive ecosystems in the world, placing them in the same category as rain forests and coral reefs!  Detritus that forms as leaves and other organic matter breaks down in the wetland is used as food by aquatic insects, shellfish, and even some small fish, and this energy is passed on throughout the higher trophic levels of the food web.  Breeding and migrating birds, mammals, and other animals depend on wetlands for habitat and nutrients.  About one third of all endangered species in the United States live exclusively in wetlands.  Additionally, wetlands store carbon in the plants and soil, keeping it out of our atmosphere and helping to regulate climate.  Wetland ecosystems are vital to fostering a healthy watershed, and they also provide a number of benefits to humans including water quality improvement, flood protection, and erosion control.

State Route 303 in Streetsboro has historically experienced flooding. Urban flooding can occur for a number of reasons, most notably due to high levels of impervious surface preventing water from infiltrating the soil.  Impervious surfaces also contribute to higher erosion rates, flashy flows, and increased sediment loads in nearby streams.  Wetlands can help mitigate these effects!

Wetlands act as natural sponges, soaking up and holding water until it can infiltrate into the ground.  Increased infiltration in urban areas is significant, as most of the runoff is derived from previous groundwater withdrawals.  Whatever water does not infiltrate into the groundwater is slowly released into nearby streams by the wetland.  This slow release helps prevent flooding during storm events.  The vegetation in wetlands also helps reduce the speed of water as it flows over the landscape.  In combination, wetlands provide immense water storage benefits while slowing water to reduce the height of floods and erosion rates.  In urban areas, downstream wetlands can help filter out dangerous pollutants as well.  In effect, wetlands counteract the harmful impacts development has on watersheds.

The majority of wetlands in Ohio have been drained for urban development.  In watersheds with high levels of wetland loss, peak flooding increases by as much as 80%.  Coupled with the flashy impacts of impervious surfaces and urban development, this figure can be pretty troublesome. Studies show that preserving natural wetlands is most likely more economically efficient than draining the wetlands, installing grey infrastructure, and maintaining this infrastructure to prevent flooding.

Constructed wetlands rarely function as efficiently as natural wetlands.  When a natural wetland is drained, the soil and water flow patterns are usually changed.  Constructed wetlands have to be carefully placed to drain into the natural stream flow as well as to capture incoming runoff from urban areas. The valuable habitat provided by natural wetlands is often lost, even during construction of new wetlands. To gain the full benefit of wetland ecosystems in Tinker’s Creek watershed, we must protect the remaining wetlands we have left.

To learn more about how you can get involved in protecting our valuable wetland resources, contact Babette Gowda at [email protected]!